Thank you to everyone that shared their opinions on how I achieved the Spiraling Out effect in my first Exercise in Photoshop Forensics post.  I definitely think it was successful enough that I’ll do another one in the future but for now let’s get to the solution!

Ofir Abe’s description was correct in his guess about my technique, which was to process multiple iterations of one image (using Adobe Lightroom) and exporting each version to Photoshop where I exposed different parts of each image using layer masks.  Why do it in Lightroom rather than adjustment layers?  Well, it’s a matter of bit depth and tonal range and pre/post demosaicing… by doing it in a RAW file I have access to ALL the data the camera captured, whereas if I converted it to a JPG/TIFF/PSD first then the file has doesn’t have access to all the data captured by the camera – especially if it’s been converted it to an 8-bit file.  Now if you convert it to a 16-bit file then that’s better, but if you ask me it’s still better to make all the adjustments before locking in your settings and exporting it to a JPG/TIFF/PSD.  By making the changes in a RAW editor (like Lightroom, Aperture, Adobe ACR) you have more power in your exposure, saturation, white balance, tonal curves etc.

To sum up for all you non-technical folks, shoot in RAW (rather than JPG) and use a RAW editor to make any color or exposure adjustments to your image, then thank me later.  Sure there are some downsides to using RAW – specifically they are a larger file size and take longer for your camera to process, but for 99% of the projects I work on RAW is so far superior it’s not even a question on what should be used.  RAW is most akin to a digital negative whereas JPG is akin to a digital print.  In a print/JPG what you see is what you get, there is no extra detail that can be extracted.  But in a negative/RAW file there is a lot of non-visible detail that can be extracted, if you know how.

But onto the step by step process of how I created them!

Straight out of the Camera 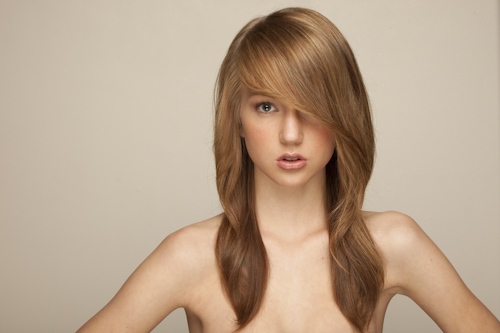 Using a classic lighting technique for beauty photography (over/under softboxes) we get a nice even lighting that provides a perfect palette to paint shapes on.

If you think it’s easy to get hair to look this perfect think again, Janae Johnson had to spend a long, long time perfecting nearly every single strand!  Lucky for me Paula Dahlberg’s incredible makeup skills combined with Sarah’s statuesque looks makes for an easy retouching job, making this out-of-camera shot nearly too perfect for a “before” image… yet that’s exactly what it is. 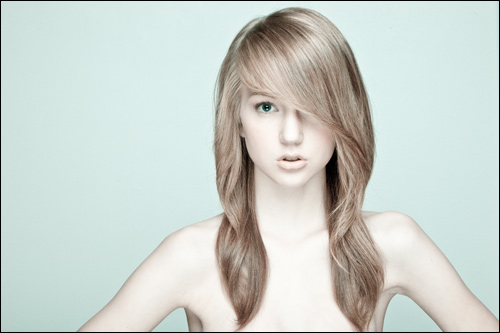 Basically I wanted to shift the entire color palette around making her skin a near-neutral white.  To do this I adjust the Temp/Tint along with the exposure, vibrance and saturation sliders in Adobe Lightroom.  I would give the exact values I shifted but they wouldn’t translate correctly to an image with a different starting point so if you are truly interested in experimenting then you’re going to have to do just that, experiment!

Obviously shifting the yellow in her skin to white requires adding a blue hue to the entire image which is how the white wall changes to blue. Once the image was brought to this point I exported it to photoshop where it became the bottom layer soon to be joined by… 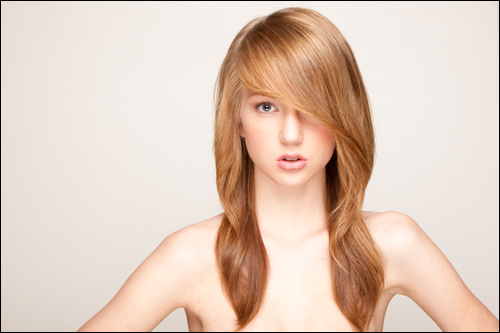 I loved the blue shift on the entire image and how it created an understated quality to it but I wanted to bring back some vibrancy to the hair, which I would later match the color of the patterns with.  So I brought the color balance back to where it needed to be but this time I increased the vibrance and saturation in all the colors to give it all an other-worldly pop in saturation. 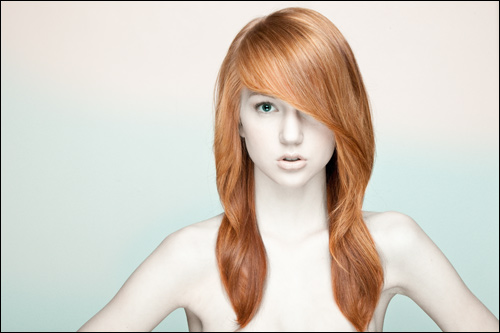 This step is simple, I overlaid the new vibrant layer onto the first layer and using a layer mask I hid everything and “painted” back her hair and a white gradient into the blue-ish background.  Incidentally, I did all the masking by hand using a very precise Razer mouse.  I’ve seen some promising shortcuts but nothing beats good old fashioned manual masking… though it seems CS5 may have made some progress in smartly refining masks… but I didn’t use their new tools for this, just good old fashioned painted on mask. 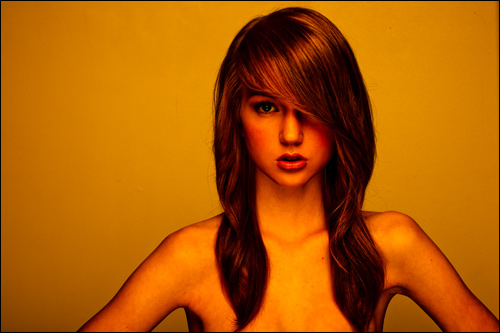 Basically I adjusted the white balance to get a color that matched the hair, then I dropped the exposure way down which made an all around darker tone, using the tone curve in Lightroom I brought the highlights up a bit to give it a more shiny appearance rather than just a darker appearance. 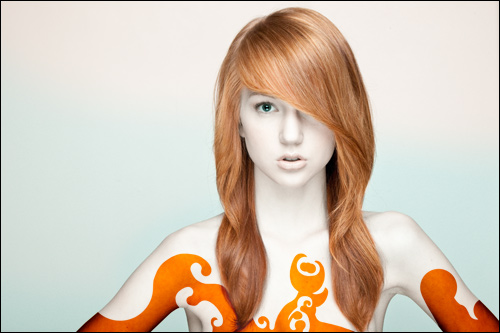 Using only the default brush set in photoshop I hand-drew all these shapes, once again using a highly precise Razer Mouse.  It will be stated (I’m sure) that I should have used the pen tool and created the shapes using bezier curves which would have resulted in a much cleaner vector shapes.  Though I am quite proficient with bezier curves (from my days as an Adobe Illustrator guru) I find whenever I’m creating vector shapes they lose a certain organic appeal, all the curves become a little too precise, a little too polished.  For that reason I opted for the old fashioned process of simply painting in the crazy shapes and allowing my imagination to stay less focused on the details.

A look at the Layers 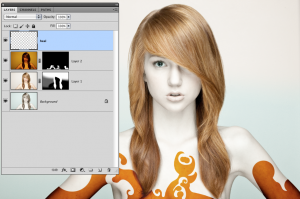 Here is a closer look at what my final PSD looked like, notice I added a heal layer so that I could do some slight touch up on the hair fly-aways, other than that you can see the three images with the two layer masks.  Very simple.

I’d love to hear them!  Leave a comment and I’ll respond, and if you liked this series of blog posts on Photoshop Forensics let me know because I could definitely be talked into doing more in the future!